The Idiosyncratic Android Robot and its Name

The Android™ robot is a familiar site on the high street and in technology circles, because the Android Operating Sysytem (OS) is so popular and used in millions of smartphones around the world. Although not many people know what is the name of the Android robot. When Android started growing in popularity Tek Eye got to thinking, what is the Android robot called?

What is the Android Robot Called?

An Internet search reveals that the Android robot name is "Mike" or "Bugdroid" (now archived at the Wayback Machine). Well most people have a first name and a surname (family name) so naming the Android robot Mike Bugdroid covers both possibilities. The name Mike suggests that the robot is male but robots are genderless, and it is humans that will apply gender to them. If the Android Robot was pink in color (colour) the name Michelle may have been given.

Droid is a Protected Term

Mike Bugdroid is sometimes simply referred to as Droid. Which is OK in a casual sense but not in a commercial sense. Why? Well the term Droid is a trademark of Lucasfilm, founded by George Lucas who created the Star Wars films. So using Droid in the title of a commercial product is not possible unless you want to pay Lucasfilm a fee, as some do as a result of the popularity of the Android operating system. I would not recommend using words such as for Droid in promoting apps or using it in app names, e.g. Droid Chess, unless you fancy a strongly worded letter from a lawyer.

Bigdroid The Other Android Robot Name

At the Google headquarters (Googleplex, Mountain View, California) there is a big statue of the Mike Bugdroid known as Bigdroid. When a new version of Android is released it is usually named after a sweet, e.g. Donut, Eclair, etc., see the full list in our Versions of Android article. With each release Google commissions a giant version of the chosen treat for display at the Googleplex (some are shown in this picture).

One thing missing from this picture is the little green dog that used to be at Bigdroid's side. Apparently Bigdroid's dog was called Alex but was said to have been stolen in 2009. Alex would have been quite easy to replace because it was a chair by Finnish designer Eero Aarnio called Puppy, and is still available from some sources. The same chair was seen on UK TV in 2005 in the reality show Big Brother.

The Android Logo was Inspired by Public Toilets

The Android robot logo was created by designer Irina Blok for use by the developer community. From the New York times article Who Made That Android Logo, that although she looked at sci-fi (science fiction) movies and toys for ideas, the logo was inspired by restroom signs.

This inspired Tek Eye to come up with a new restroom sign: 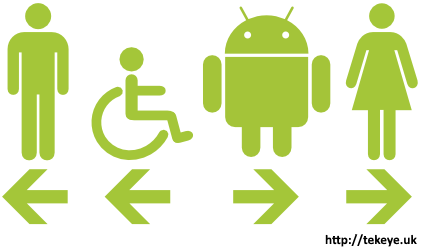 The Android Logo Would Not Make a Good Robot

Overall it looks like Mike would not be a useful robot. Well what about a producing a robot that could personify Tek Eye, no doubt Android aficionados will rubbish it but at least if a physical version existed it would be able stand up and hold items. So here is Tek Eye in the metal, the arms are connected to the body, it has a lower centre of gravity with flat feet so will not fall down, there are claws to hold stuff and it has a friendly smile. Only one eye, but a nice long one (maybe for a future Cylon/Knight Rider style scanner), after all it is Tek Eye and not Tek Eyes! So meet Tek the Blue One Eyed Robot. 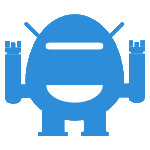 For more information on using the Android logo see Google's Android Brand Guidelines and our article on it's usage.

For an SVG version of the Android robot logo use our android_robot_logo.svg file.

↓markdown↓ CMS is fast and simple. Build websites quickly and publish easily. For beginner to expert.

Maintain your PC with Piriform